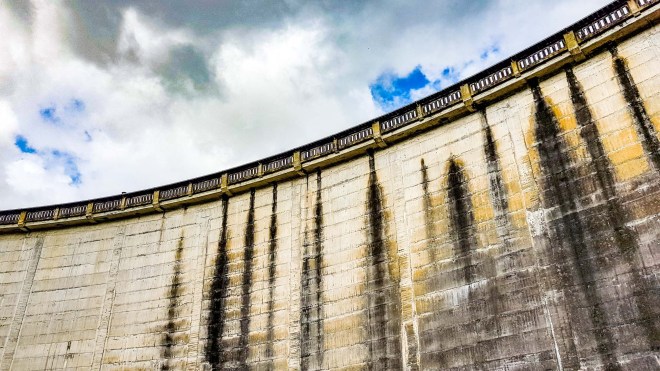 The Cambridge to Lake Karapiro portion of Te Awa – the Great New Zealand River Ride (Ngaruawahia to Horahora). Although yet to appear in the Waikato portion of Te Araroa the national cycleway-walkway. The westerly end begins at the intersection of Carlyle Street where Browning Street becomes Maungatautari Road in Leamington. Some 6km in length, give or take, and running alongside Maungatautari Road (and the Waikato River – a paddock or so to the north) through Pukekura to Judd Lane at Lake Karapiro. The eastern portion at the Karapiro Hydro dam end is interesting – a cantilevered boardwalk arrangement below the place called Crows Nest (Redoubt) or Te Tiki o te Ihingarangi just as you drop down to the dam.

This tread plate covered pontoon runs at right angles to the 2000 metre Karapiro rowing course while under /through it, at 90 degrees, run each of the boat holder pontoons which are pushed and pulled forward or back to accommodate differing boat lengths – singles to eights. This is a two person job with the boat holder for each lane laying on the end of each pontoon holding their boat in position while their companion pulls and pushes – often it seems with their feet – at the intersection of the two pontoons. As the start approaches the race marshall off to the side asks that the boats be bought into exact alignment with the tweaking continuing right up to the point the starter, in the tower directly behind us, calls the start. Eight lanes – sixteen people not counting the marshals and starters – twenty folk at least – though this morning there were fewer with some hardy souls dashing between stations. Added to this a stiff breeze.

Diocesan School for Girls (Auckland) rowing squad members view the Lake Karapiro rowing course from above the 1000 metre mark on Maungatautari Road this morning Saturday the 29th of January 2011. The evident camaraderie, team and school spirit these young women exhibit brings much colour (and noise) to the highly disciplined and competitive (not withstanding the matching enthusiasm of their rivals) atmosphere of the Cambridge Town Cup as often fiercely contested battles unfold out on the water. There’s another shot of these young women here – at least I think it’s the same lot! :) The day gallery is here.